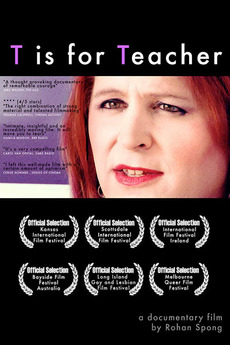 T IS FOR TEACHER charts the experiences of four transgender school teachers who wish to transition whilst employed within the North American school system.

Director Rohan Spong travels to New York, Minneapolis, New Mexico and Arizona to interview these teachers about their struggles and triumphs, covering issues such as gendered bathrooms, the impact of transition on students and the depiction of transgender women by mainstream media.

Along the way, he engages students, parents, school administrations, a newspaper editor and conservative church groups in a discussion about the lessons learned from bearing witness to these remarkable women’s courage.

“T is for Teacher is a powerful and ultimately hope-filled affair that manages to confound not only the smothering narrative of youth disaffection, but also the lazy criticisms too easily fired against small-town America.”
STEPHEN A. RUSSELL, THE LOWDOWNUNDER

“Intimate, insightful and an incredibly moving film. It will move you to tears”
NAMILA BENSON, RRR RADIO

“I left this well-made film with a certain amount of optimism”
CERISE HOWARD, SENSES OF CINEMA